Henry Gantt invented the Gantt charts – a tool I live by.

After watching the U.S. fumble initially in World War I, he believed we would have lost the war if the allies hadn’t stepped in and helped.  Before and during the war, he’d seen great leaders in management go to Washington and fail, sometimes spectacularly.

While the army was calling for ships and shells, trucks and tanks, these men busied themselves with figures, piling up statistics, apparently quite satisfied that they were doing their part,” he wrote

He was describing a classic management problem — one that all of us know too well from bureaucracies — but this was occurring during a national crisis.

“In many cases, these statisticians did not differentiate between that which is interesting and that which is important,” he added.
“In but few cases did they realize that from the standpoint of production, yesterday’s record is valuable only as a guide for tomorrow.”

In these days of algorithms, that might sound obvious. But Gantt, who received degrees from the Stevens Institute of Technology and John Hopkins University, was doing pioneering work in the 1910s. Before the war, he’d had been busy developing a bar chart that depicts the start and end dates of key parts of a project. These soon became fundamental in the building of the Hoover Dam and the Interstate Highway System.  Tools we could put to use in building infrastructure and restructuring the budget today.

The concept was that the full team could see issues and needs, and collectively  address them to get the whole completed.   As Roger Martin would say years later, Henry Gantt was an integrative thinker — –possibly the first in Systems Dynamics.  More than 100 years after Gantt introduced the charts, they were integral to Alan Mulally’s turnaround at Ford Motor Company.

Gantt wrote about businesses as service organizations.   One of my favorite Gantt quotes has to do with the importance of thinking beyond profits: Let me conclude with a thought Henry L Gantt wrote 110 years ago – that might warrant a healthy discussion and some action today:

Let us imagine two nations as nearly identical as we can picture them, one of which had a business system which was based upon and supported by the service it rendered to the community.   Let us imagine that the other nation, having the same degree of civilization, had a business system run primarily to give profits to those who controlled that system, which rendered service when such service increased its profits, but failed to render service when such service did not make for profits.   To make the comparison more exact, let us further imagine a large portion of the most capable men of the latter community engaged continually in a pull and haul, one against the other, to secure the largest possible profits.   Then let us ask ourselves in what relative state of economic development these two nations would find themselves at the end of ten years? 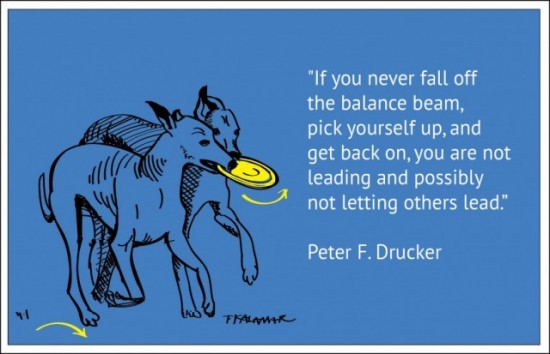 A big thank you to JD Meier for inviting me to post on his blog, Sources of Insight.  We’re happy about the response it’s received.  I love his site!